The grid has been used as a graphic, photographic, architectural, sociological, and conceptual means of investigating the connections and frictions between similar -- and seemingly similar -- images. It can be found in the aesthetic rigors of the factory facades photographed by Bernd and Hilla Becher or in the less-self-conscious collection of suspects on the bulletin board of a local police station.

This exhibition looks at various ways the grid as installation can be used to disrupt and illuminate social categories. It features grids of work by Mapplethorpe, Emory Douglas, the Bechers, Walker Evans, Mike Disfarmer, Alwyn Scott Turner, Stephen Shames, Alexandra Penney, Hyers and Mebane, Tetsu Okuhara, the Minneapolis Police Department, the Associated Press, the IRT Corporation, Warhol and others. The exhibition intends to underscore and undermine the implicit power in the language of repetition and association. It exhibits a grid of themes, including: the portrait as incarceration, the bureaucratic gaze returned, the repetitions of repressive choreography. It features solemn studio portraits of male “friends,” the obsessive documentation of a country mourning an assassination, Mapplethorpe’s 1979 portraits of the Soho art dealers.

Between the Bricks and the Blood: Transgressive Typologies will be on view April 15 through May 8, 2010. Steven Kasher Gallery is located at 521 W. 23rd St., New York, NY 10011 Gallery hours are Tuesday through Saturday, 11 to 6 pm. For more information or press requests please contact Kirsten Bengtson at 212 966 3978, kirsten@stevenkasher.com. 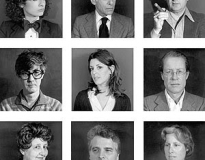 The New Yorker The New Yorker reviews our exhibition Between the Bricks and the Blood: Transgressive TypologiesApril 15, 2010
Download PDF