Signed and annotated with photographer's stamp on mount verso

Children standing on the street near an open window, New York City, ca. 1945

Steven Kasher Gallery is pleased to present Sandra Weiner: New York Kids, 1940-1948. The exhibition features over 20 rare vintage black and white prints, many exhibited for the first time. Weiner’s photographs are celebrated for their perceptive depiction of everyday life in New York City's close-knit neighborhoods of the 1940s. Her photographs of children at play create a palpable sense of place. Weiner’s photographs reveal random moments of grace, transforming social documentation into a broadly humanist mode of street photography. Her sensitive and subtle renderings of neighborhood atmosphere make her photographs of New York heartwarming. Also on view is the exhibition Dan Weiner: Vintage New York, 1940-1959. This is the first time that exhibitions of the husband and wife photographers have been on view concurrently.

Weiner focused on New York’s poorer children, possibly because she identified with them but more so because she wanted to tell a story of perseverance and hope. Weiner’s work highlighted social concerns of the era, however she focused her lens specifically on the city’s youngest denizens. For Weiner, children surviving the rough-and-tumble city streets became a symbol of fortitude. She strolled the city’s streets or posted at the edge of vacant lots where children play and caught them absorbed in their own worlds. Included in the exhibition is an extended essay in which Weiner followed a young boy named Mickey through his daily life in the tenements of East 26th Street. This is Weiner’s work at its most penetrating. Through this extended study, defining aspects of the boy’s life are revealed. The subtle details that emerge in these images give us a clear sense of the family’s hardship. However the young boy’s palatable joy and energy shines through, triumphing over his circumstances.

In the early 1940’s, Sandra Smith joined Paul Strand and her future husband Dan Weiner as a member of the Photo League, a group of socially minded photographers. She was especially influenced by Walker Evans, Henri Cartier-Bresson and Helen Levitt and set out to capture the daily drama on the sidewalks and stoops of the city’s tenements.

It was through her experiences with the Photo League that Weiner was exposed to other female photographers. The League was a rare entity at the time. Although there are no official records, there were thought to be at least 100 women who were closely involved, if not full members. Among them were Lisette Model, who later taught Diane Arbus and Larry Fink, and Berenice Abbott. Being a photographer allowed Weiner the opportunity to place herself within the primarily male field of art. The democratic nature of the Photo League gave Weiner the ability to have an imprint and make a difference. 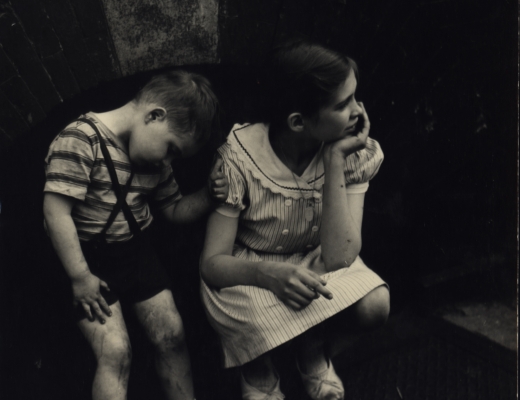 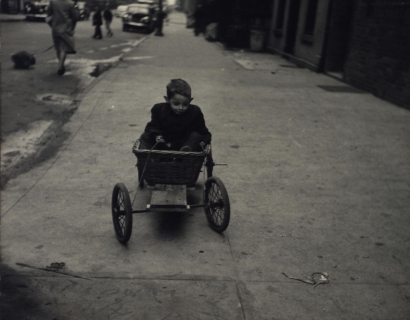 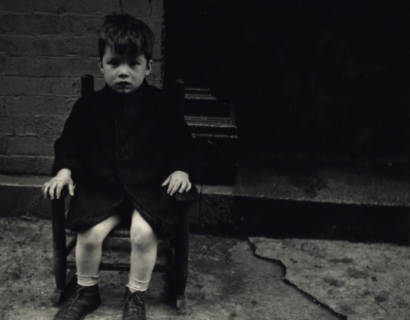