Steven Kasher Gallery is proud to present the first American exhibition of Christina Kruse. The exhibition launches the publication of Reisebuch 1-5, Kruse’s limited edition artist’s book, and will feature other significant recent work by Kruse including photographs, photo collages illuminated in watercolor and other media, and a series of photograms.

Although Kruse is perhaps better known as one of European haute couture’s top fashion models, her work as an artist and photographer has been recognized for over a decade, shown by well-regarded galleries in Paris and Germany, and featured in Vogue, Interview, Harper’s Bazaar, Glamour, I- D.magazine, and Mixte.

A key source and focus of Kruse’s Kasher Gallery show is the notebooks Kruse has created over the past twelve years while on the road—her Reisebuchs. These have frequently functioned as the primary laboratory of her artistic practice. And in all, she has employed her distinctive style of collage. Not exactly artist’s sketchbooks—although many of her current large-scale works are derived from their pages. Neither are they simply a personal journal or diary—though they do provide an intimate record of Kruse’s emotional life, loves won and lost, hopes and fears explored, challenges faced, the dead remembered, and friendships celebrated. Since in much of this (as well as other work), Kruse explores her themes in self-portraits employing elaborate costumes, herReisebuchs  can also be read both as the record of an ongoing series of private performance by a fine actress, and as an extended, multi- faceted self-portrait.

Kruse’s Reisebuch project begun as an enterprise of solitude, done without assistants or collaborators, and almost purely for herself. In 1995, her very first entry reads:

It is 1:35 AM and I am starting to glue my Polaroids into this book. I would like to make a lot of pictures, an emotional diary in form of photography. I started about 3 weeks ago and have just finished the 3rd one. I think it’s great. And oddly enough I seem to identify with it. Let’s see what else will come out of my head ....

During the dozen years since, Kruse’s approach to mixed media collage has evolved into a style which typically combines small Polaroids with textured tape, watercolor, ink, crayon, gouache, metallic paper, newsprint, and colored plastic gels. But, initially, she says, it was something of a conversation with herself, that she had between modeling jobs, or when far from home on assignment, on idle nights with time to kill in a luxury hotel suite. She would muse on a character, think through her story, dress up appropriately, take photographs with a timer, and then stay awake for hours creating elaborate layouts which amplified the narrative of the image with text and collage or drawing.

In 1997, Kruse shyly showed her first book to a few friends. The enthusiasm of one of them landed her her first job, a fashion story for the highly regarded Paris magazineMixte.  This in turn brought her to the attention of Katy Barker, who signed her up to the agency’s illustrious roster of photographers, which included such luminaries as David Bailey, Jean Baptiste Mondino, and Terry Richardson. Kruse’s first gallery show followed almost immediately, organized in Paris by Donatella Versace, another instant Kruse fan. Her most recent European solo show was held at the Robert Morat Gallery in Hamburg in 2007.

Kruse currently lives and works in New York. Interviews can be arranged through the gallery prior to and during the course of the show.

Reisebuch1-5 is published in a limited edition of 425 signed and numbered copies. Each is hand finished by Kruse, and each copy features a unique hand- stamped cover. A special hand-branded leather bound edition of 75 copies is also available in a wooden box with a unique photogram. 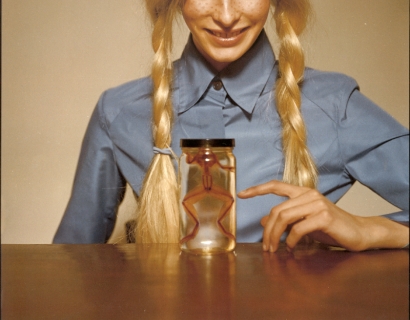